This is a BETA release of the Engine Toolkit SDK. While there are engines currently running in production build using this toolkit, some features might be changed in backward-incompatible ways and are not subject to any SLA or deprecation policy.

Welcome to the Veritone Engine Toolkit. Use the list below to navigate around this documentation or read it in order to get started.

Engines allow you to process files (or chunks of files like frames from a video) in the Veritone platform.

This toolkit is aimed at Cognition engines processing chunks. For example, images, frames from videos, video clips, and audio files. If you are building a different kind of engine, you may need to use lower level APIs.

Engines are deployed to the Veritone platform in Docker containers, which can be thought of as being like lightweight virtual machines. The platform will automatically spin up instances of your engine to meet demand.

To deploy an engine into production, you will need to perform the following tasks:

The rest of this guide describes how to do this, and provides additional reading for more advanced use cases.

How to build an engine

An engine is an executable program, packaged along with its dependencies, into a Docker container. Engines listen on an HTTP address and implement Webhooks, which are called when they receive work.

To see the code for a complete working engine, choose from the list below:

If you would like to contribute an additional example engine, please open an issue to start a conversation.

Engines must implement the following webhooks:

Each webhook provides unique functionality, and is therefore triggered by a unique HTTP request. The requests are described in the following sections.

The webhook endpoints are configurable and are specified using environment variables in the Dockerfile.

The webhooks are expected to return a 200 OK successful response, otherwise the engine toolkit will retry the operation by making the same requests again.

The Ready webhook is used to determine if the engine is ready to start doing work or not.

The webhook should reply with a 503 Service Unavailable status until the engine is ready to receive work, at which point it should reply to this webhook with a simple 200 OK response.

The Process webhook is used to perform some processing on a file (like the frame from a video).

The body of the request is a multipart form (Where Content-Type is multipart/form-data) containing everything the engine needs to do its work.

The following fields will be posted to the Process webhook:

As the Engine Toolkit evolves, we expect to add more fields here. If you notice something missing, please open an issue and let us know.

The handler for the Process webhook should return the results by writing a JSON response.

Most languages and frameworks have very easy ways of consuming HTTP endpoints and writing JSON responses. It is recommended that you use existing libraries where possible.

The following JSON is an example showing some faces that were found in the image.

If you have a question about what your engine should output and this documentation doesn’t cover it, please open an issue to start a conversation.

If your engine is not going to process a chunk, the Process webhook should return a 204 No Content response.

The Engine Toolkit will report the chunk as ignored.

If the chunk cannot be processed, the webhook should return a non-200 response code (e.g. 500) and a meaningful error should be written as the response.

There is no need to return a JSON body on failures, plain text is fine.

To get started, you need to download the Engine Toolkit SDK. It contains the engine binrary that will be bundled into the Docker container when you deploy your engine to the Veritone platform.

Did you know? You only need to download the latest release, there’s no need to clone the repo.

Since the Webhooks are just HTTP endpoints, you can test them by HTTP requests directly to your own code.

If you want to manually test the Webhooks, you can access the built-in Engine Toolkit Test Console.

The Engine Toolkit Test Console is a web based tool that lets you simulate the HTTP requests that your engine will receive in production.

The following is a preview of the test console running in the browser: 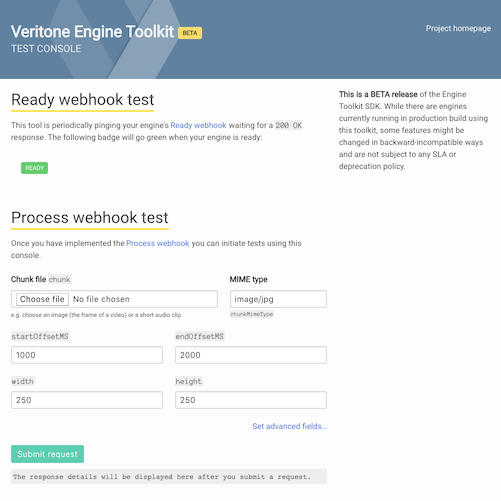 You can upload your own file to process, and use the web form to tune the parameters that your engine expects to support.

To access the test console, run your Docker container with the docker run command. Set the environment variable VERITONE_TESTMODE=true and expose port 9090 with the -p 9090:9090 argument:

Once the container is running, you can open a browser at http://localhost:9090/ to access the Engine Toolkit Test Console and use it to interact with your engine.

Do not set the VERITONE_TESTMODE environment variable in your Dockerfile as there is a risk it could be deployed to production in test mode, which will prevent your engine from working.

Veritone engines are Docker containers that run in the platform. To provide an engine, you must build a Docker container (or image) that can encapsulate your dependencies and execute your code.

A Dockerfile explains the steps that Docker needs to take in order to build a container.

The following is an example of an engine Dockerfile:

The most common commands in a Dockerfile are:

To learn more about Docker and what it can do, we recommend that you browse the official Docker Documentation.

If you want to dig deeper into what can be done in your Dockerfile, you can read the Dockerfile reference manual or continue reading for a light overview.

The Dockerfile above describes a simple but complete engine. This section explains the components that make up an engine.

The manifest.json file is a JSON configuration file the describes details about your engine, such as its engineId, which file-types it supports, what kind of data it outputs, and more.

The platform will automatically generate your manifest file.

Usually your manifest.json file sits alongside your Dockerfile in your engine project folder.

The engine executable gets added to your docker image as the entry point, and it acts as a proxy between the Veritone platform and your webhooks.

It is available when you download the Engine Toolkit SDK.

The environment variables specified with the ENV command inform the engine tool which webhooks to hit.

The ENTRYPOINT must always be the engine executable as the first argument, but the other arguments are for you to use to specify your engine code process.

To deploy your code in Veritone, you must first create an engine on the platform.

This process is trivial and easy to clean up, so don’t worry about getting the forms exactly right the very first time. This guide will call out any important fields.

Your engine will be created and you’ll be redirected to its console page.

In the in-app documentation of your engine’s console page, click GENERATE MANIFEST FILE to have the platform generate your manifest.json file.

The rest of the in-app documentation explains how to authenticate the Docker tools and use them to tag and push your engine.

This section includes some helpful guides for how to solve common problems when building engines.

To specify a region (such as an area on an image) the Veritone platform expects a relative array of x,y points where each value is between 0 and 1, with 0 being the left or top of an image and 1 being the right or bottom.

Relative (or ratio) values are used so that they remain correct regardless of the resolution of the image.

This example essentially draws a box around the entire image.

The following diagram represents the points for a box describing an object that is 50x50 in the center of a 100x100 image: 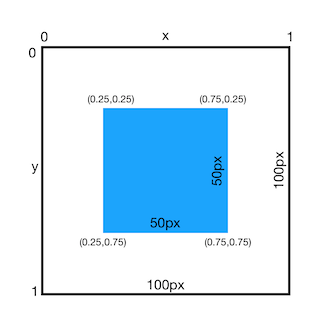 The boundingPoly array for this object would be:

To calculate the x and y ratio values, you divide x by the width and y by the height:

This section provides answers to common problems that have been reported by engine developers.

If you see an error complaining about an unknown authority, it’s likely that you do not have root certificates installed inside your Docker container.

Try adding the following line to your Dockerfile:

This will install the certificates as part of your Docker build.

This solution has only been tested when the base Docker image is FROM alpine:latest. For other base images, you might need to install them with a different command.